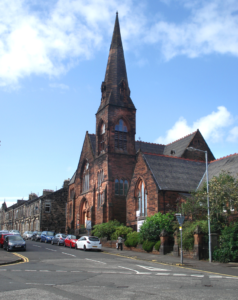 Grange Free Church was established in Kilmarnock in 1876

The Grange Free Church was established in Kilmarnock in 1876 as a result of a number of members of the congregation of the Free High Church being dissatisfied with the election of the new minister. A site in Woodstock Street was purchased for £239 with a 30 shilling annual feu duty and the now B-listed church was designed and built by the architect Robert Samson Ingram. Robert was a prolific ecclesiastical architect and worked on a large number of churches across Ayrshire, whilst his father was James Ingram (1799 - 1879), himself a celebrated Kilmarnock architect who designed the Palace Theatre and St Marnock’s Church. More information about the architectural firm and their work can be found in the Dictionary of Scottish Architects.

On 29 December 1877 a memorial stone was laid by H C Campbell, Sheriff Principal of Ayrshire and this stone can be found below the arch on the left hand side of the window over the entrance to the church. The stone contains a bottle in which a variety of historical artefacts were encased, much like a time capsule. These artefacts include a digest of the 1871 Census, a list of the Town Council of Kilmarnock and copies of both the Kilmarnock Standard and the Edinburgh Daily Review.

In a similar way to the conversion of the church into a climbing centre, where the bouldering centre was the first part to be opened in the former church hall, so too the church hall was completed first and doubled as the venue for services until the main church building was finished. The main church was officially opened on 31 August 1879 and was an imposing red sandstone structure on the skyline with the 140ft spire housing a steel bell which weighs 24 hundredweights. The bell is 4ft 6½in in diameter and remains one of the largest in the country. A congregation of over 850 people could be accommodated in the church when it was originally completed. 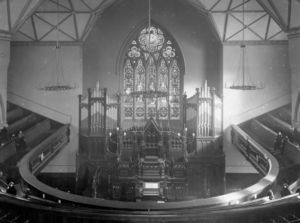 The magnificent Good Shepherd stained glass window was added in 1896, paid for by a Miss M Taylor in memory of her father William Taylor who had been a generous supporter of the church from its earliest days. A pipe organ was installed in 1902 by Foster & Andrews of Hull and was still in use in 2009.

In a precursor to the renovation works carried out as part of the Above Adventure project, there was an extensive re-decoration renovation in 1956 which helped to make the interior much lighter and saw a redesign of the pulpit and choir area. A new baptismal font was donated at the same time and incorporates the original silver basin used since the formation of the Church. In 1994 two oak teaching crosses displaying carvings based on the faces of the St Martin’s cross on Iona were commissioned and dedicated to the memory of all office bearers with thanks for their years of devoted service.

Celebrations for the 100th anniversary in 1976 saw more redecoration and the addition of a smaller hall between the Church and the original hall in order to accommodate growing  numbers of children attending Sunday School. Grange Church finally closed in 2009 and the congregation joined with the then Laigh West High Church to form the New Laigh Kirk.

A brass and oak memorial in the vestibule was gifted by the Trustees of the Grange  Savings Bank and is inscribed with the names of those members of the congregation who fell in the World War. It also contains the names of Mr & Mrs James Barr who lost their lives in the sinking of the S S Lusitania in May 1915, and commemorates the years of service given by the first three ministers Rev James McCulloch (1877-1911), Rev Andrew Aitken (1902-1929) and Rev Robert Duncan (1930-1954).

This memorial has been sensitively restored as part of the conservation project and retains pride of place in the building. 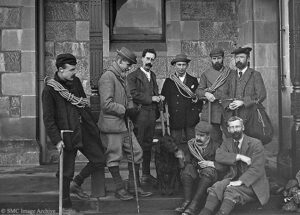 With its landscape lending itself to those wishing to explore and challenge themselves physically, it is no surprise that Scotland has such a strong mountaineering and climbing heritage. There are a number of publications which document the early years but perhaps the most significant event was the founding of the Scottish Mountaineering Club in Glasgow in 1889, just a decade after the building of the Grange Church.

More information about the organisation’s genesis and growth can be found on their website, but suffice to say that the period of time leading up to the First World War saw a significant explosion in the exploration and discovery of Scotland’s landscape with many exploits being recorded in the SMC Journal which was first published in 1890 and is still in existence today.

The Above Adventure Centre at the Grange Church will be a Mountaineering Scotland Regional Hub, and will be the perfect location in which to celebrate Scotland’s proud mountaineering heritage at the same time as inspiring climbers of the future. This is particularly relevant given the inclusion of climbing as a sport for the first time in the 2021 Tokyo Olympics and Paralympics.